From Naval Battle Zone
Jump to navigationJump to search 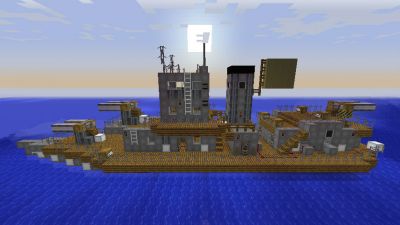 The CL Castle is a larger class of ship, classified as a Light Cruiser. It features extensive armament, including double-barrel cannons, a barrage of AA-Guns, and a Mk2 depth charge launcher system. She was utilized a public ship for use for all player up till early 2016.

Castle, Birthplace of the CL Castle

The CL Castle class, like the DD Atlantis, is also very important to the history of the server. It was the second ship ever to be designed and tested on the server. Built by Maximuspayne, the CL Castle was designed to be a testing platform for the newly modified Movecraft and AimCannon plugins. Like the DD Atlantis is also has a shallow keel at only two meters to help it navigate old Minecraft oceans back at the time (1.7 beta oceans were very shallow). It's hull was laid and designed at Maximuspayne's and premejo's old world Castle (after which it is named!). Upon completion, also like the DD Atlantis, for it's maiden test voyage it sailed successfully to the Atlantis Dock, which became the permanent home for the original U.S.S. Castle (CL-1). 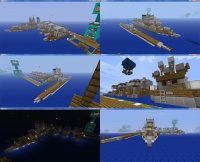 Old screenshots of Atlantis Dock with the original ships

One of the first additions programmed into AimCannon by Maximuspayne, the double-barrel cannon, was one of the reasons to prompt development of the CL Castle. Due to the massive fire-power of the ship and it's large size for the time...it was thought this warship would be invincible in the original 1.7 beta oceans. Even though it was only one meter deeper in draft, it greatly limited it's ability to navigate those old shallow oceans. It's large size also made tight maneuvering difficult...some land had to be cleared away in order for the first Castle to complete it's maiden voyage.

Old image of a CL Castle

The design has been updated a number of times over the years, however the hull still has the same basic shape and layout. The original CL Castle design featured piston engines in a boiler design, combined with a Clock IC (from the Falsebook plugin) that provided a visual simulation of a working boiler...and some sound effects too. Sadly the piston engines were abandoned due to problems we had with pistons not moving correctly with the ships. The engine room was redesigned to remove the pistons and replace them with the newly-made custom NavyCraft texture pack.

Before and after of the CL Castle engine room

The original weapons of the Castle included three double-barrel cannons (which it has always had), and arrow barragers. Arrow barragers were a circuit, part of the Falsebook plugin, that when triggered would shoot a barrage of arrows. The CL Castle combined many barragers to make arrays on all sides of the ship that could effective blanket most any direction with arrows. Much time was spent on the old CL Castles sailing the ocean and turning the barragers onto mobs. The AA-Gun, which replaced the arrow barragers, and the depth charge launcher would not be developed and added until later.

You can still see the original U.S.S. Castle (CL-1) where she was once displayed at the Atlantis Dock. At that time, she had still equipped it's original piston engines, arrow barrage shooters (what we had before AA-Guns) and lever-controlled doors. Sadly the ship doesn't sail anymore...moving vehicles have been banned in the old world ever since the introduction of War World 1.

She along with other Public ships in use prior to 2016 were retired for a time due to the redesign of the Spawn and Shipyards. The last generation of the design remains schemed (saved) on the server Schematica page. This preservation allows it to be restored for normal use should the issue arise that warrants the need to restore the big ship again. In January 2017, the ship was updated and brought back into use as a public ship. In April 2017, the NBZ server was shutdown permanently. However the Castle along with the other publically used ships were preserved and had been made available with the NavalCraft codes which allow them to function for public use. The ship has appeared on NavalClash as one of that server's publically used ships.

The CL Castle is a powerful and well designed ship. The array of double cannons will incinerate a DD Atlantis or PT Boat in a single barrage, and the Mk2 Depth Charge will tear any nearby submarines apart. The Castle has little to fear, as unlike the more basic boats, the Castle has a rear armament. The multiple AA Guns scattered around the vessel will also render the ship impossible to approach by most aircraft. However, captains must still be careful of experienced gunners who will almost certainly try to take out the cannons. This tactic often succeeds in damaging the ships ability to fight, so always try to have repair materials to build a new cannon to replace the one lost.

While the CL Castle is well armed and decently armored its relatively complex layout can confuse new players and make it hard for the crew to move around the vehicle. It is recommended that there be enough crew so that they do not need to move between positions during battle. In addition the AA gun platform places most anti aircraft guns in the same location allowing all of the rear defense to be knocked out in a single shot.

The CL is well armed and will destroy any smaller ships that attempt to go close. However, the CLs larger surface area, especially its longer length, provides a excellent target for torpedoes. However, do not get too close to the CL while firing the torpedoes as it will decimate your ship. Use radar to estimate the position of the CL, and try to fire the torpedoes out of sight. If all else fails, use a submarine. Since CL Captains might be preoccupied with avoiding debris and steering towards merchants, they might not notice your sub approaching until it is too late. However, too much exterior lighting will make your sub obvious against the dark background of the seafloor. Most captains will notice your sub easily and try to escape or approach you in hope of landing a hit with the depth charge. In both cases, just align your line of fire with the ship and fire your torpedoes; torpedoes will discourage a approaching CL from coming closer, while a fleeing CL will be sunk easily if you are able to reload the torpedoes quickly.